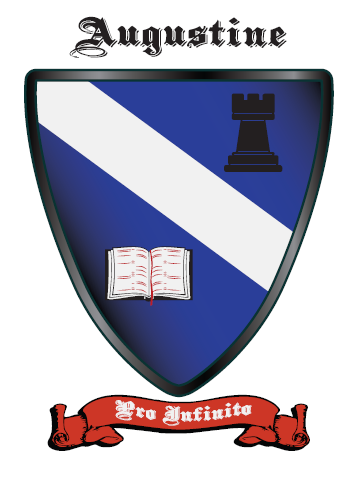 House Hero: Augustine of Hippo was an early Christian theologian who  lived in the fourth century.  Widely respected throughout the religious world, his writings influenced the formation of Western Christianity and philosophy.  Among his most famous works are City of God and Confessions.  Augustine was raised by a devoutly Christian mother and a pagan father.  He lived an immoral life and taught Rhetoric until he was converted to Christianity at the age of 31, partly through the influence of Ambrose, Bishop of Milan.  Later, he became the Bishop of Hippo in Africa, his native country.

House Scripture: “If I have the gift of prophecy and can fathom all mysteries and all knowledge, and if I have a faith that can move mountains, but do not have love, I am nothing.” – 1 Corinthians 13:2

Quote: “Thou hast made us for thyself, O Lord, and our heart is restless until it finds its rest in thee.” – Augustine of Hippo